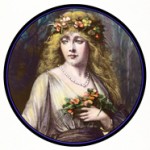 Leroy Anderson is best known for “Sleigh Ride” and “The Syncopated Clock”  two of his symphonic pieces originally commissioned by Arthur Fiedler for the Boston Pops Orchestra.  Less know is his 1958 Broadway musical, Goldilocks, with Don Ameche, Elaine Stritch, Russell Nype and Pat Stanley (who won a Tony for her role) headlining a stellar cast.

The story is of Max Grady, a early silent film maker, and his crew exploring the limits (artistically and financially) of this new medium.  Maggie Harris, a recently-retired Broadway star is pressed into service as Max’s leading lady.  The finances catch up the the fiancés and bring the show to a rousing Egyptian finale worthy of King Tut’s treasures.

Performances are April 20 and 21, 2012.  Tickets are on sale through the Lakewood Theatre Box Office.