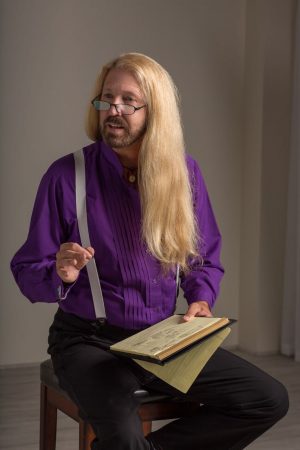 David Hastings began his performing career at the ripe old age of three. Piano lessons started at eight, followed by an acting debut at age 10 as Franz Gruber, the composer of “Silent Night.” His first professional gig was playing ragtime at Shakey’s Pizza Parlor, to help pay for his college education. He was offered his first theatrical Music Director position—for Man of La Mancha—at age 19.

In a career that has spanned 35 years, David has sung or acted in, accompanied, directed, or produced more 100 shows. Some of his favorites have been Godspell, Fiddler on the Roof, The Telephone, The Boyfriend, Sweetheart Serenade, Mame, Annie Get Your Gun, Hello, Dolly!, My Fair Lady, You’re A Good Man, Charlie Brown, Cosi Fan Tutti, and Footloose. He has served as guest vocal coach for the U.S. Air Force Band of Flight, guest director at the Pacific Conservatory of the Performing Arts, and guest clinician for the Association of Christian Schools International choral festival. The Grants Pass, Oregon, Voice of Freedom, a 250-voice community choir, found its sound under David’s vision and leadership. In March 2007, he traveled to Spain for that country’s national choral training seminar, and spent a week coaching Coro Barcelona, Spain’s largest choral performing group.

Versatility is the name of the game for David. A few years back, in a single week, David conducted a full orchestra and choir, sang Beethoven’s Ninth Symphony with the Dayton (Ohio) Philharmonic Orchestra, and was guest vocalist with the Hauer Swing Big Band. David has numerous CD recording projects to his credit, as well as radio and commercial jingles. As an actor, he played the roles of Wally in the ARTS production of Uncle Phil’s Diner and Herbie in the Pentacle Theatre’s Gypsy, and was featured as Simon Zealotes in the 1999 Ashland, Oregon, performances of Jesus Christ Superstar.

Besides teaching 50 students every week, David is also active in the Salem arts community. In 2003, he performed (on seven minutes’ notice) with the Tommy Dorsey Swing Band at Salem’s Historic Elsinore Theatre. This was followed the next year by his program “Dave and His 88 Friends: A One-Man Show,” which he was then asked to reprise for several charities. In addition, David regularly coaches and accompanies many of the local high school performing groups. His Jazz Trio plays several times each year on The Willamette Queen Riverboat and at other venues. He also has performed with the Salem Pops Orchestra, the Pentacle Theatre, and the Salem Chamber Orchestra, and recently accepted the position of Artistic Director for the newly formed Prudence Playhouse, Salem’s new dinner theatre. He is also the keyboard player and vocal soloist for the Rose City Swing Band in Portland, Oregon.

David has three children who work in the performing industry as photographers, musicians, songwriters, dancers, and choreographers in Hollywood, CA. For nearly three years, David served as a chef for the wildly popular Orchard Heights Winery Sunday brunch, where he was often overheard serenading guests. David enjoys cooking and entertaining guests at home, especially when using the fresh herbs from his backyard garden.

A Few David’s Favorite Projects over the years

Voice of Freedom Singers (1991-1996, Grants Pass, OR) A community chorus combining 250 singers from dozens of organizations. Administrated behind the scenes prep to put the project together–recruiting, rehearsal tracks, rehearsal logistics, technical staff, production logistics.  The most fun part of this project was organizing the team to do a complete sound, lights, staging and live radio feed on the horse racing track following the last race of the day.  90 minutes later, the doors opened to seat the audience of 7000.

Evening in December (1979-2006; MN, CA, OH, OR) An annual Christmas theatrical event. Managed a creative team of mostly volunteer theatrical writers, videographers, sound, lighting, and technical people to develop original works over 27 years in 6 different cities. Administrated the structure and rehearsal of up to five vocal groups, 250 singers, actors, symphony orchestra and crew of 100 volunteers for construction, sound, lights, video, special effects, publicity, graphic design, box office and front of house crews. These performances were a community mainstay during the holiday season.  In Salem (1999-2006) these shows annually sold out 7000 tickets in 48 hours.

Worship Northwest (1999-2007; Salem, OR) Visionary, team leader, event organizer, President of the Board of Directors.  WNW began as three churches networking together, and grew into the largest worship training event in the US.  Overseeing volunteer logistic teams for registration, set up, event booths, breakout faculty and tracking, parking and hospitality, plenary sessions, keynote speakers, entertainment.