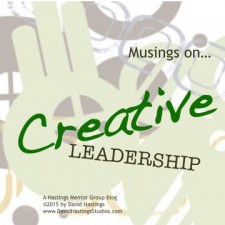 Two years ago, I accepted a writing project that would take about a year to complete Complexity wasn’t an issue. Consistency would be the key to success. I would need to write about four hours each week. So, I went back to a lesson I learned in college.

Do the same work,
in the same place,
at the same time.

The suggestion that we are “creatures of habit,” it is often pejorative, a critique of thoughtless repetitions.  Creative habits, however, are powerful tools in the hands of the creative leader!  With them we get more work done in less time.  Creative habits release us to refine our artistic expression and relish the creative moment at hand.

So my helpful habit came in the form of “Three Friends Coffeehouse” at SE 12th and Ash.  Every Monday morning of 2013 I left the dishes and the clutter of my walk up on Hawthorne and started my week at Three Friends.  I would sit at a table by the front window, sip a cup of “Paris at Midnight” tea, and open my laptop.

The first few weeks I struggled to begin writing. I had trouble focusing and being in the zone. But by the third week, the magic had begun. This became my place, my time, and writing from 8 am to noon Monday mornings became a healthy, productive and invigorating habit. It wasn’t always perfect, but it did work.  Most weeks, I was writing in my head before I even arrived at the coffee shop. In fact many weeks all I had to do was catch the ideas as they flowed and help them land on paper.

I had become Pavlov’s dog.  Three Friends served as the bell.  Soon I was salivating to get something on paper each Monday morning.  These leadership skills—doing the same work, at the same time, and in the same place—worked their magic. I was “behaviorally conditioned” to be in “writer mode” before I arrived each week. I wasn’t wasting energy trying to “get focused” when I sat down at that table by the window.  I built a habit that let me jump into the task quickly.  I consistently and quickly harnessed my best creative mojo. In fact, I finished the project in mid-August, 4 months early.

What task do you have that would benefit from consistent attention? What project would you enjoy more if it could be completed and more quickly and creatively?

This morning I am launching “Musings on Creative Leadership,” my new blog project.

So where did I go to write?

…and the first two don’t count!